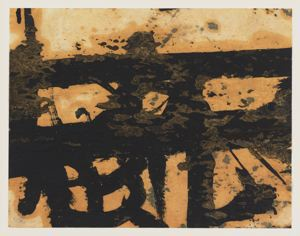 “Kline would be denounced now as conceptual and premeditated,” artist and critic Donald Judd wrote in 1964 after seeing one of the artist’s preparatory sketches. Did Kline’s practice of defining gestures on paper and translating them to painting compromise his ability to be spontaneous and authentic, as Abstract Expressionist ideology required? This work suggests otherwise. An array of verticals and horizontals, brushed with a calligrapher’s determination but too complex and expansive to be understood as a cipher, contextualizes various markings: floating drips that mar the surface, oily residue that seeped into the paper and made it more transparent, and ink splatters on the verso that shine through. The physicality of the deep blacks and the drawing’s varying textures and multidirectional energies make this visually powerful work an outstanding example of what art critic Hilton Kramer in 1981 called Abstract Expressionism’s “sacred belief in the dense Expressionist surface.”