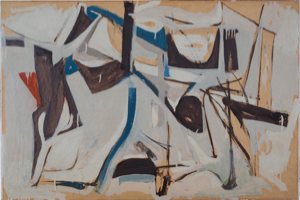 Jack Tworkov was the age of the century, born on August 15, 1900, in Biała Podlaska on the border between Poland and Russia. He moved to New York City in 1913. He learned English quickly, went to Columbia to become a writer, and graduated with a BA in English in 1923. In 1923, he started taking classes at the National Academy of Design. He began to amass a significant group of colleagues in painting and literature. During the Depression, Tworkov met Willem de Kooning in the Public Works of Art Project. From there, Tworkov was initiated into the world of painters trying to create a new way of painting distinct from that of the French masters Matisse and Picasso. In due time, he became a mentor and teacher to others. Bowdoin’s picture was a gift of Walter Gutman, class of 1924, an art critic, filmmaker, and collector who studied painting with Tworkov. Vincent Katz Poet, translator, art critic, and curator