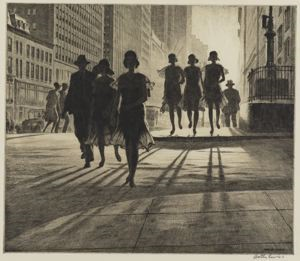 Martin Lewis was an Australian-born printmaker who worked in newspaper illustration and is noted for the striking use of dark shadows that give his works a film noir-like effect. In Shadow Dance, clusters of backlit female figures, identifiable by their almost ethereal translucent skirts, dominate the frame, their individual features fading almost into silhouette forms while long shadows stretch before them. These figures are juxtaposed with the intense glow seemingly radiating outward from the heart of the city. The clean streets, tall buildings, and the women’s short dresses and cloche hats signal a new urban modernity then emerging in American cities during the 1920s.