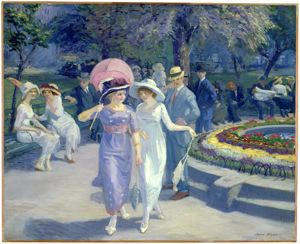 This light-hearted painting revels in the pleasures of early twentieth-century New York City. John Sloan, a member of the group of realist artists known as “The Eight,” believed that contemporary American art should celebrate the commonplace. He said, “I saw the everyday life of the people, and on the whole I picked out bits of joy in human life for my subject matter.” Sloan later wrote about the “lavender light” with which this painting was suffused. He rendered it with a harmonious palette drawn from the color system devised by the painter Hardesty Maratta, a system Sloan had used since 1909 when artist Robert Henri introduced him to Maratta’s colors. While Sloan’s painting style was influenced by his time as a student at the Pennsylvania Academy of Fine Arts, his work as a newspaper illustrator in Philadelphia during this period also profoundly shaped his artistic career.