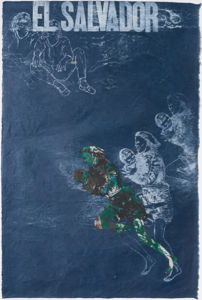 handprinting and printed collage on paper

Nancy Spero dedicated her career to chronicling social and political concerns, particularly the experiences of women. A feminist and anti-war activist, between 1981 and 1986, Spero cast a critical lens on countries embroiled in political tensions and conflict. El Salvador depicts a mother crouching protectively over her child. The triple-repeated image conveys a sense of motion, suggesting perhaps that they are caught in the act of escaping. In the top left corner, a seated woman is seated and wailing, lamenting the conflict taking place. “El Salvador,” written above, roots the viewer in a sense of place. When this collage was created, El Salvador was in the midst of a civil war, which lasted until 1992. Spero’s focus on women and children emphasized the human costs of war. El Salvador and other works in this collage series were Spero’s denouncement of war and its atrocities and a demand for change.