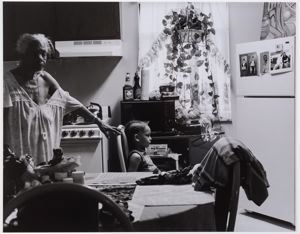 In a series of photographs created between 2001 and 2014, LaToya Ruby Frazier documented the lives of three generations of women in her family: her grandmother, her mother, and herself. Her photographs were taken inside her grandmother’s home and across the neighborhoods and industrial sites around her childhood home in Braddock, Pennsylvania. Located on the Monongahela River outside Pittsburgh, Braddock is the site of Andrew Carnegie’s first steel mill, the Edgar Thomson Works, which began operating in 1875 and was the last functioning mill of its kind in the region. This multi-generational portrait, and those represented in the series, reflect on the family’s experiences in Braddock and the physical, mental, and environmental effects the steel industry had on each of the women’s lives. In 2014 she published this series in the book The Notion of Family, making widely accessible her family’s history documented through art.