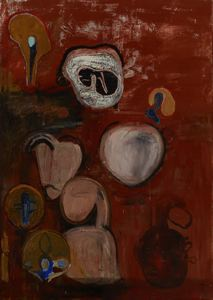 Gift of Agnes Gund in honor of John Studzinski

Terry Winters’s practice encompasses and reflects upon drawing, painting, and print-making, as it coalesces abstraction and figuration. His works flirt simultaneously with the architecture of life and the structure of information. Vessel develops themes from his just completed Morula series of lithographs, such as the blossoming of cellular forms at the moment of conception. As Winters explained to critic Jennifer Samet: “My approach was structural. I was intrigued by forms that looked ‘real,’ but were difficult to identify or whose identity was linked directly to their structure: crystals, shells, honeycombs. There was an architecture to the ‘morula’ forms, in terms of the cell development.” Thus, shapes in Vessel might call to mind the heart, skull, or stomach. Manipulating highly viscous pigment, Winters gives a tactile and visual presence to the objects he fashions, and in so doing creates a powerful universe that reflects the generative potential of the arts and the natural world.