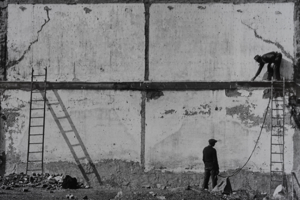 Taken towards the end of the Great Depression, this photograph captures the decaying infrastructure of a city without extinguishing hope for its future. Arnold Newman is best known for his portraits of well-known people, works in which he defines his subjects through their surrounding environment. Here the photographer offers a portrait of the city of Philadelphia itself, capturing its character through cracks, ladders, and contrasting tones. In the midst of crumbling buildings, the dark silhouettes of two men appear against the light concrete wall. While the photograph shows a rundown city in need of repair, it also expresses a sense of optimism, which extends not only to the city but seems to radiate outward to the country as a whole: two men are already at work to fix the problem.