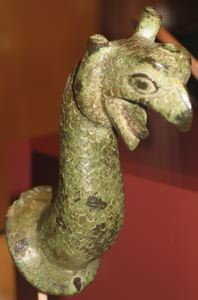 Caldron Protome in the Form of a Griffin

Protomes were figural projections used on ancient cauldrons. They were also given as prizes to victorious athletes and dedicated at Greek sanctuaries. Exotic and mythical beasts, such as lions, griffins, and sphinxes, were favorite subjects. Griffins, in particular, alluded to Near Eastern influences and suggested connections to a world beyond Greece. The city of Corinth, strategically situated on an isthmus, served as the gateway between Greece and the outside world. Corinth became a natural conduit for trade goods from the eastern Mediterranean and export to the west. Corinthian art was among the earliest to reflect the reopening contact with the Near East and Egypt.