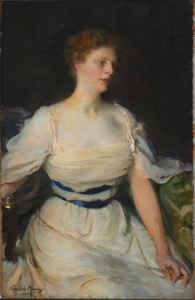 Describing Cecilia Beaux, one critic wrote that she “is one of the few women whose work is not merely a reproduction of that of the artist from whom she received her art education.” Beaux’s portrait shows the young Anna Fisher in an introspective mood shortly before her marriage to William Hart. She placed her subject close to the picture plane in a pose that highlights the translucent fabric and cobalt accents of her gown. Contemporaries admired Beaux for her sympathy with her subjects. Fisher’s averted eyes and thoughtful expression give the portrait a psychological dimension uncommon in society portraiture of the period. This portrait was exhibited at the Universal Exposition in Paris in 1900, where Beaux was one of seven American painters awarded a gold medal.