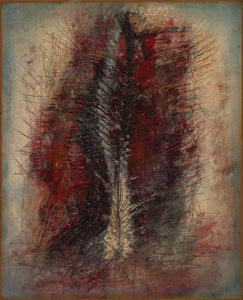 Bequest of William H. Alexander, in memory of his mother and father, Mr. and Mrs. William Homer Alexander

The prodigiously talented German draftsman and photographer Alfred Otto Wolfgang Schulze, or Wols, moved to Paris in 1932, where he quickly found friends among Surrealist circles. Throughout the 1930s and his internment during World War II, Wols created drawings and watercolors that responded to unconscious impulses with seismographic sensitivity. It was only in 1946 that Wols took up oil painting. His experimental gestural paint application and unconventional surface treatment with scratches and splatters was immediately recognized as a major innovation. At the time, Wols socialized with the likes of Alberto Giacometti, Jean-Paul Sartre, and other intellectuals and artists who planted new seeds for European culture at a time of devastation and trauma.