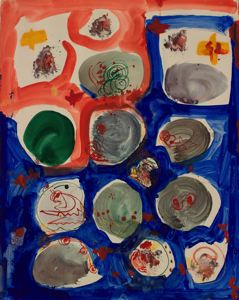 Bequest of William H. Alexander, in memory of his uncle, Charles D. Frazer

This watercolor dates to the year of Hans Hofmann’s first New York solo show, when he was 64 years old. He was a well-known teacher--he ran art schools in his native Germany (until 1933), in New York, and Provincetown--and an influential contributor to the rise of Abstract Expressionism. Hofmann helped to connect Parisian and New York art circles. He encouraged generations of artists to free color and form from the corset of representation. He also nurtured the ambitions of budding collectors, such as William Alexander. Alexander, who met Hofmann in the 1940s and focused for many decades on collecting European and American artists endorsed by Hofmann.