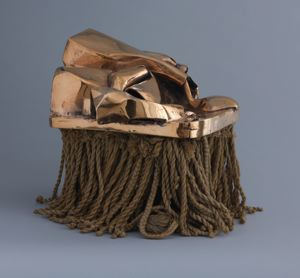 A visual artist, poet, novelist, and sculptor, Barbara Chase-Riboud’s body of work has been described by curator Hans Ulrich Obrist as a “protest against forgetting.” Zanzibar #3 is no exception. For more than five decades, Chase-Riboud has created monumental abstract forms with a deep and nuanced understanding of history, identity, and sense of place. Evocative of an elaborate headdress, Zanzibar #3 is one of at least six known works in a series named after the East African island in the Indian Ocean that was a hub for the Arab slave trade, which thrived from the seventeenth to the nineteenth century. Her Zanzibar series was inspired by her poem “Why Did We Leave Zanzibar?” (1969–1970), which meditates on the consequences of the slave trade and enslaved people’s history of resistance. One verse reads: Why did we leave Zanzibar? Sweet fragrant mango-stenched beach, Breasts pressed flat against steamed sand, Seeping through sieve-like flesh, Carrying carats of ancestor dust, Rattling like pearls in oyster shells.