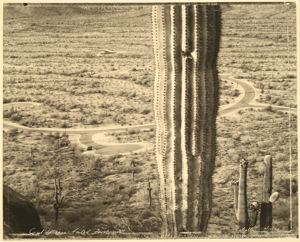 The juxtaposition between the winding road and desolate desert landscape emanates an eerie aura. The scene is captured from a downward angle that excludes the sky, thus focusing our attention on the landscape. No human traces are left except for a stationary vehicle and few lampposts. The cactus is the only living thing left in the photograph, a native “civilian” of the desert. The cul de sacs interrupt the serene beauty that once was the undisturbed desert. Civilization leaves ruin in its wake after its unsuccessful attempt to settle the parched land. The ongoing battle between civilization and nature, a common trope in Klett’s photography, is also at the heart of the frontier. The photograph subtly debunks the romanticized notion of a frontier that benefits from the symbiotic relationship between progress and nature. Instead this image reveals the continued hardships inherent to settling the American West.