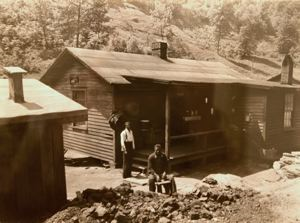 In the summer of 1935 Berenice Abbott and her partner Elizabeth McCausland, an esteemed writer and art critic, left their home in New York City for a months-long trip that took them as far south as Mississippi and as far west as Illinois. In an old Ford, they traveled collecting material for a book project about the nation during a time of economic uncertainty. With a special interest in the lives of rural Americans, Abbott took photographs in West Virginia that highlighted the region’s mining and agricultural economy, including this view of an African American miner’s home and two of its inhabitants. Abbott never realized this book, since later that fall she returned to her exploration of New York City under the auspices of the Works Progress Administration. Changing New York, published in 1939, became a landmark photographic survey of the metropolis.