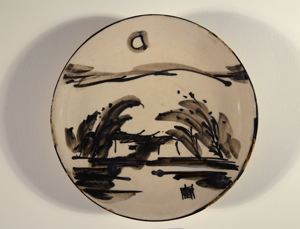 This unassuming plate, freely painted with a moonlit pastoral scene, evokes traditional Japanese ceramics, yet is distinctly modern. Its creator, Tomimoto Kenkichi, was widely revered in Japan and among the first group of craftspeople designated Living National Treasures in 1955. Unlike traditional potters who served long apprenticeships, Tomimoto attended art school and studied in England, where he learned firsthand about the Arts and Crafts movement. With Bernard Leach, Hamada Shōji, and Yanagi Sōetsu, he founded mingei (translated as Folk Art), a movement that sought to revive Japanese folk craft as an antidote to industrialization. The Bowdoin plate embodies mingei philosophy in being handmade and utilitarian, and in its direct reference to the natural world in both materials and imagery. Through the pottery and writings of Leach, mingei became foundational to the studio craft movement in the United Kingdom and North America in the post–World War II decades. Sequoia Miller Chief Curator, Gardiner Museum, Toronto