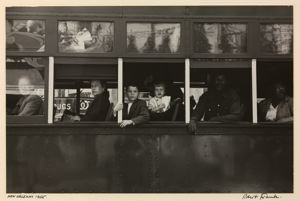 This picture may be the most readily recognizable of the photographs that made the book featuring them an icon. For one thing, when the U.S. edition of The Americans was published in 1959, containing the revolutionary collection of Robert Frank photographs and an introduction by Jack Kerouac, Trolley—New Orleans was on the cover. Before you got to the others, then, you came to this, a searing image of passengers seated on a trolley car and staring out their windows, with whites in the forward seats and blacks in the rear. For another thing, as many of the book’s other photographs recede into time, becoming exotic records of how things were, Trolley remains all too topical and modern. New Orleans public transit is no longer segregated de jure, but the nation still struggles with de facto racial injustice. Russ Rymer Journalist, novelist, and Elizabeth Drew Professor of English Language and Literature, Smith College