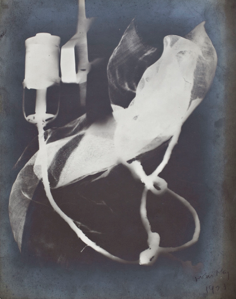 Photograms are camera-less images produced by placing objects onto photographic paper. Depending on the exposure time, the transparency of the object used, and the distances between object, paper, and light, the process may produce clearly defined silhouettes or nearly unrecognizable blurs. While the process had existed since photographic paper was invented, Man Ray claimed to have discovered the technique, which he described as “startlingly new and mysterious,” by accident and called his own versions “rayographs.” Developed alongside other “Dada” artistic strategies, which often courted chance and always defined conventional techniques, Man Ray’s use of ubiquitous objects, such as what appears here to be an electrical mixer, also references his friend Marcel Duchamp’s invention of the readymade.